In 1950, the Village of West Jasper Place was incorporated with a population of 9000 and James Stone was elected the village's first mayor. In 1951, electors opted to incorporate as a town and renamed the community Jasper Place. Jasper Place's close proximity to Edmonton and its progressive platform towards development and by-laws such as night shopping caused the town to continue to grow and by 1964 was the largest town in all of Canada with a population of 38 000. In 1964, due to a desire to provide better services to its citizens, the town was amalgamated into the City of Edmonton. (From City of Edmonton Archives)

Today, there are many aspects of our history and the entrepreneurial spirit is alive and well in the SPR Business Association and our over 500 businesses. We are a growing mainstreet district with almost every service and business experience you need and is becoming a favourite regional 15 minute district for central west Edmontonians. 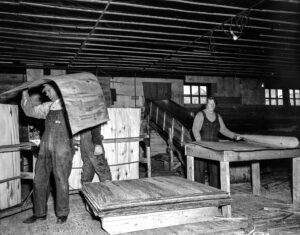 Brooke Leifso Throughout the early 20th century, Jasper Place was home to a number of lumberyards and mills that have all closed without leaving many buildings or plaques as lasting memories. We are curious to learn more about the workers, owners, and clients involved in these businesses. Merrill D. Muttart and Gladys Edith Muttart opened…

What is a BIA?

What is a BIA? It has come to our attention that while we use the acronym BIA, there are many out there who don’t know what a BIA is or what it does for the business community it represents. BIA stands for Business Improvement Area. Originally called BRZ, Business Improvement Zones are quite common throughout…